Yesterday I learned that the board of TU Delft has appointed me as Antoni van Leeuwenhoek Professor.

Eelco Visser of the Faculty of EEMCS has been appointed Antoni van Leeuwenhoek professor. The aim of these chairs is to promote young academics who produce excellent work to the position of Professor at an early stage, so that they can develop their academic careers to the fullest possible extent.

Update July 14: Not everyone (on twitter) understood the meaning of the announcement above. Let me explain the context and its implications. 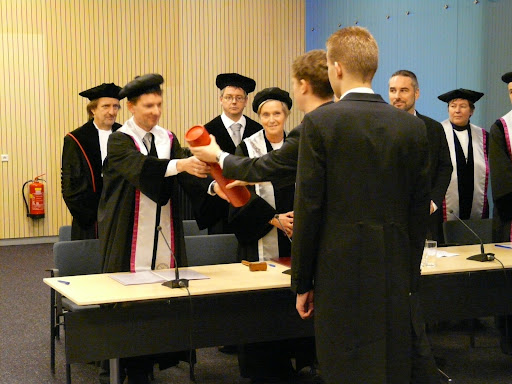 Professor of Computer Science: First of all, the appointment means a promotion to ‘full professor’ or ‘hoogleraar’ (highteacher) in dutch.

This has several practical implications. First, I now legally carry the title of ‘professor’. We use ‘assistant professor’ and ‘associate professor’ as english equivalents of ‘universitair docent’ and ‘universitair hoofddocent’, respectively, but these ranks are not (officially) addressed as ‘professor’. Second, it means dressing up in gown on formal occasions such as PhD defenses. (This an actual improvement, since it saves a trip to Kloeg in the center of Delft to change!) Third, and most importantly, this means I can finally take full responsibility and credit for advising my PhD students. In the dutch system only a full professor can be the primary responsible advisor (‘promotor’) of a PhD student who signs off on a dissertation. This means that assistant and associate professors depend on a full professor to ‘promote’ their PhD students, even if they did all the work from acquiring grants to daily supervision. This unfortunate situation is formalized in dutch law. While many academics in The Netherlands agree that promotion rights should be liberalized, there does not seem much movement in this direction.

The title is named after the 17th century Delft scientist

known as “the Father of Microbiology”, and considered to be the first microbiologist. He is best known for his work on the improvement of the microscope and for his contributions towards the establishment of microbiology.

An internal associate professor may be nominated for an AvL professorship, without external recruitment or an open vacancy for the position of professor being necessary. [..] The AvL professorship was created to give the greatest possible recognition to extremely gifted academics who fully satisfy Professor 2 criteria [..].

This should be read in the context that in The Netherlands, promotion to full professor from associate professor is not a standard career prospect even with abundant academic achievements; an old position needs to become vacant or a new position needs to be created to which one can apply.

Another aspect of the AvL appointment is that

[..] it enables such academics to commit themselves to teaching and research for several years during their most creative and productive phase without the onerous burden of leading a research team.

I am indeed looking forward to a most creative and productive new phase in my career. However, I will be leading a research team. With my VICI grant, other funding from NWO and Oracle, and the appointment of Guido Wachsmuth as Assistant Professor, I will be leading a team of some ten researchers and software developers. (For which we are recruiting.) But I am planning to do a considerable amount of hands on research myself :-).